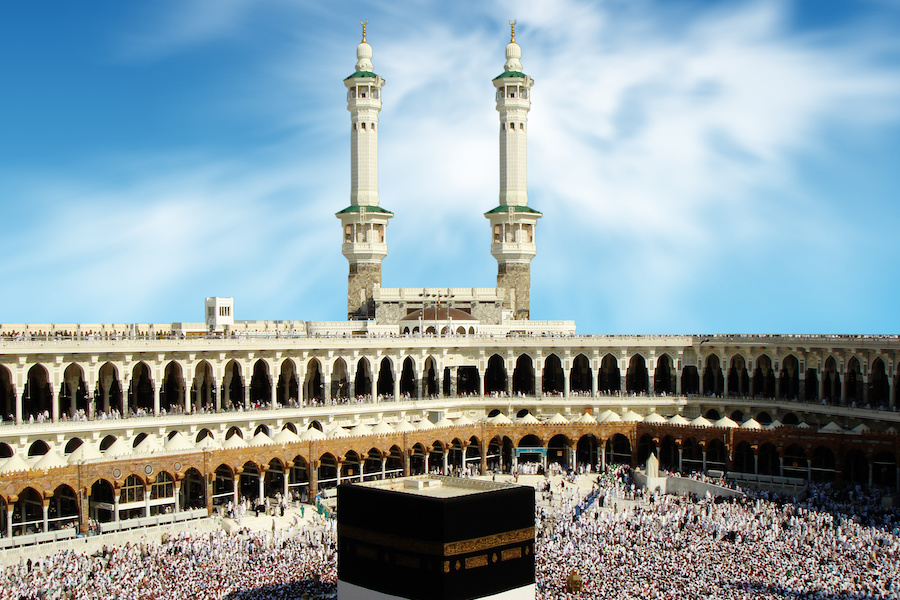 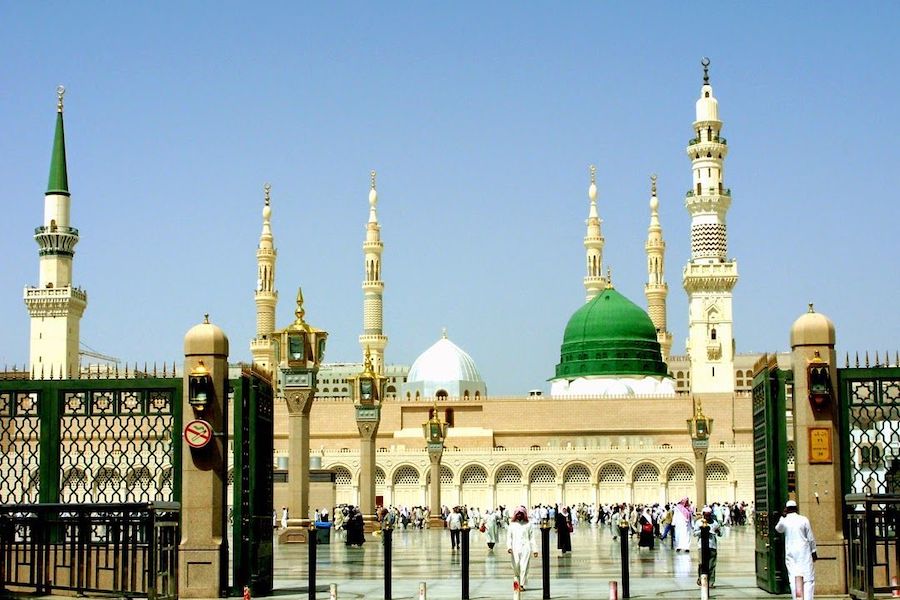 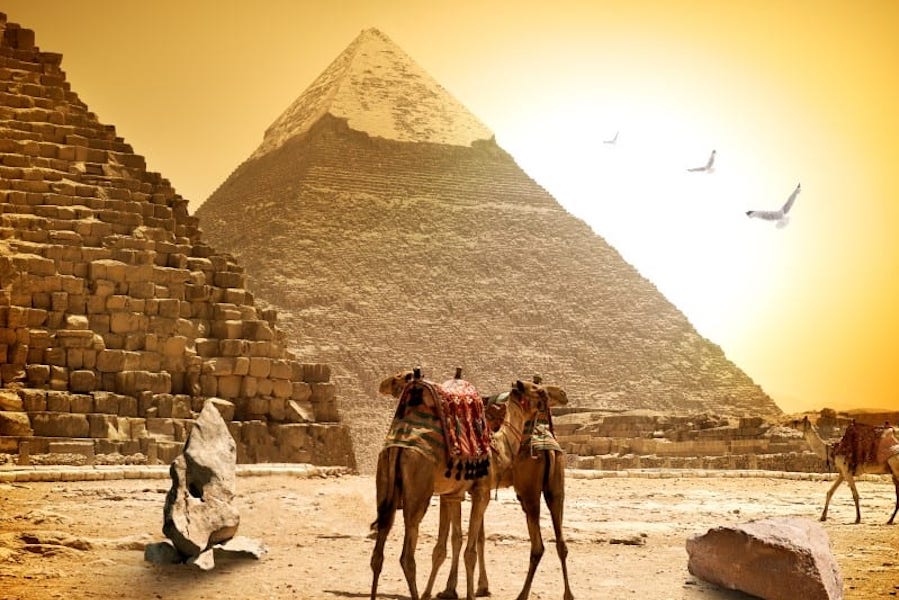 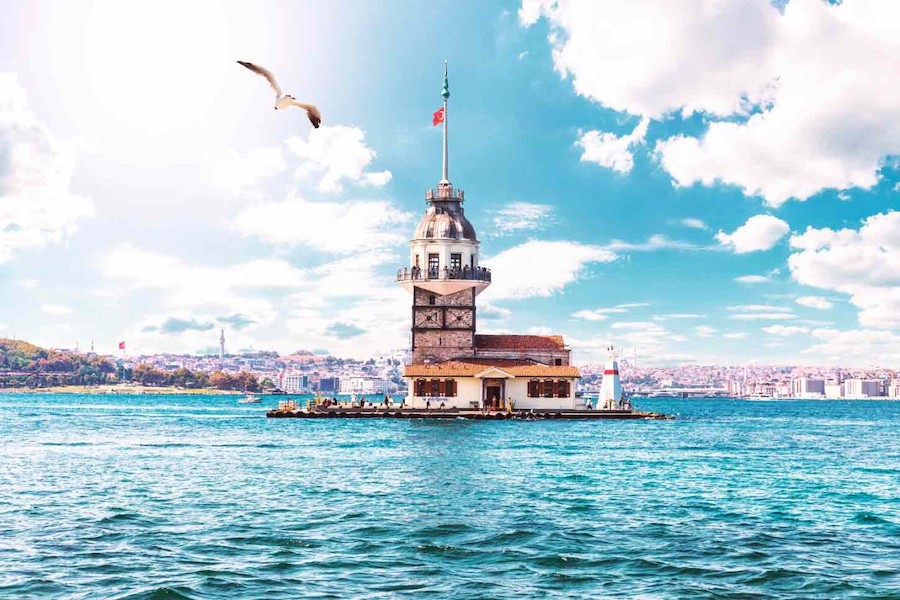 Note if you are holding a non-USA Passport please check Package (B) or Contact us for more details.

Flight meals and to go dinner
Arrival to Al Madinah Al Munawara late night, hotel is already booked and your room is ready, will provide a to-go dinner for the late arrival.

Breakfast, Lunch Bags and drinks on the bus.
• Al Madinah Al Munawarah – Breakfast at the Hotel
• Put on your Ihram and prepare for Umrah.
• Check out the rooms at 11:00AM
• Fri prayer at Al Masjid Al Nabawi. Then come back to the hotel lobby to get the bus to Makkah.
• Bus will have lunch bags and drinks. All buses will stop at Miqat Abyar Ali to renew the Niah (Intention) for Umrah.
• Buses will be divided into 2 groups, those who want to head to Makkah directly will go directly. And those who can afford to spend extra time one the road then their bus will take the Hijrah road to Makkah ( Also know as the Old Road of Madinah or the Road of the prophets ), on that road we will make 2 stops one at A Rawhaa where we can see the historial place of Al Rawhaa and the Al Rawhaa well of water, then the second stop will be at Badr battle ( Ghazwat Badr ) leaders will guide and explain the history of the places.
• Arrival to Makkah al Mukarramah
• Dinner at the hotel.
• Performing Umrah around 11PM

Breakfast, in Makkah and  Lunch at Jeddah Luxurious Place
Early Morning – Perform the farewell Tawaf and prepare for departure, luggage collection will be advised.
Buses will be leave from Makkah Al Mukkarramah to Jeddah Airport
Depatrture Jeddah to Cairo
( A Warm Welcome to Cairo)
After a smooth flight, your private representative will receive you with a warm welcome to Cairo, and assist you with a hassle-free arrival. Your private modern A/C bus will transfer you to the hotel for check-in.

Breakfast & Lunch
( Giza Pyramids , Sphinx & Egyptian Museum )
After a delicious breakfast at the hotel, you will be on the move in a modern, private, AC vehicle to The Giza Plateau. A private Egyptologist will take you on a tour to visit the Great Pyramid Area.  Then, you will visit the Valley Temple, and Great Sphinx, where you can pose to take unrivaled photos to share with your friends and family. It’s time for a delicious Egyptian meal made with love and oriental flavors at a very nice restaurant with overlooking the pyramids. Afterwards visit the Egyptian Museum of Antiquities, houses the most splendid collection of king Tutankhamun alongside many other fascinating artifacts, back to the hotel & overnight
Meal Plan: Breakfast – Lunch

Breakfast & Lunch
( Saladin Citadel , Mohamed Ali Mosque , El Muezz street & Khan El Khalili Bazzars )Breakfast at the hotel , start your day tour to visit the Citadel of Saladin; One of the world’s greatest monuments of medieval warfare, built at 12th century to fortify Cairo against Crusaders. Then visit Alabaster Mosque; which built in 1848 AD, imitating Blue Mosque of Istanbul, under the reign of Muhammad Ali Pasha, whose tomb is located within the mosque, it is named Alabaster mosque due to the use of alabaster for coating its interior and exterior walls. Then direct to one of the most important Islamic site in Cairo which is El Muezz St., where we can find more than 25 Islamic monuments, Finally Relax and shop at Khan El Khalili old Bazaar, a lively market where you can haggle for souvenirs or traditional local crafts. After the end of the visit you will be transferred by private A/C bus back to the hotel & overnight . Meal Plan: Breakfast – Lunch

Breakfast & flight Meals
See You Soon! In Cairo and Welcome to Istanbul Going to Cairo Airport to Fly to Istanbul . After a nice breakfast at the hotel, your private A/C bus will transfer you to the airport for your departure flight.  Arrival to Istanbul

Breakfast  & Lunch or Dinner
Topkapi Palace: The largest and oldest palace in the world, Topkapi is the crown jewel of the Ottoman Empire. With its treasury and exotic buildings overlooking the Golden Horn, your visit to Topkapi promises to be a truly fascinating experience. Topkapi Palace Museum is the most important museum of Turkey and the Balkan Peninsula. It is an incomparably rich treasure-chest, brimming with items of historical and religious importance containing the most holy relics of the Muslim world such as the Prophet Muhammed’s cloak and sword.
Hagia Sophia Museum :
The Hagia Sophia, one of the historical architectural wonders that still remains standing today, has an important place in the art world with its architecture, grandness, size and functionality. The Hagia Sophia, the biggest church constructed by the East Roman Empire in Istanbul, has been constructed three times in the same location. When it was first built, it was named Megale Ekklesia (Big Church); however, after the fifth century, it was referred to as the Hagia Sophia (Holy Wisdom). The church was the place in which rulers were crowned, and it was also the biggest operational cathedral in the city throughout the Byzantine period.
The 8- 7.5 m diameter calligraphy panels that were written by Caligrapher Kadıasker Mustafa İzzet Efendi were placed in the main walls of the structure. The panels that read  “Allah, Hz. Muhammed, Hz. Ebubekir, Hz. Ömer, Hz. Osman, Hz. Ali, Hz. Hasan ve Hz. Hüseyin” are known to be the biggest calligraphy panels in the Islamic world.
The Hagia Sophia was converted into a museum by Mustafa Kemal Atatürk’s orders and has been functioning as one since February 1, 1935, welcoming both local and foreign visitors. According to a deed dated 1936, the Hagia Sophia is registered as “Ayasofya-i Kebir Camii Şerifi on behalf of the Fatih Sultan Mehmed Foundation for maoseleum, akaret, muvakkithane and madrasah on 57 pafta, 57 island and 7th parcel.”
Blue Mosque: The Sultan Ahmed Mosque is popularly known as the Blue Mosque for the blue tiles adorning the walls of its interior. It incorporates some Byzantine elements of the neighboring Hagia Sophia with traditional Islamic architecture and is considered to be the last great mosque of the classical period.
Hippodrome: The former center of sportive and political activities of Constantinople. You will be able to see the Obelisk from Egypt, Serpentine Column from Delphi and fountain of Willhelm II.

Tour of the Bosphorus Stars – As we take our boat cruising through the waterway separating the two continents, Europe and Asia, with a possibility to take photographs of marble palaces, ancient wooden villas of Ottoman architecture besides modern residentials and luxurious apartments & the RUMELİ FORTRESS the historical armament built by Sultan Mehmet II (the Conqueror) to control and protect Bosphorus. A unique example of military architecture.

Eyub Sultan Mosque – The Eyüp Sultan Mosque ( Eyüp Sultan Camii) is situated in the Eyüp district of Istanbul , outside the city walls near the Golden Horn . The present building dates from the beginning of the 19th century. The mosque complex includes a mausoleum marking the spot when Eyup Job Al Ansari , the standard-bearer and friend of the Islamic Prophet Mohammad , is said to have been buried. A mosque complex (kulliye ) was constructed on the site in 1458 by the Ottoman Turks only five years after the conquest of Constantinople in 1453. By the end of the 18th century the mosque was in a ruinous state, perhaps as a result of earthquake damage,
and in 1798 sultan Selim III ordered the whole structure other than the minarets to be pulled down and rebuilt. This work was completed in 1800. The eastern minaret was rebuilt in the original style by Mahmud II in 1822.
Eyüp Sultan is believed to have died during the first Arab siege of Constantinople in the 670s. His tomb is greatly venerated by Muslims and attracts many pilgrims. The mausoleum is on the north side of a courtyard opposite the main entrance to the prayer hall of the mosque.
The mosque was the traditional site for the coronation ceremony of the Ottoman Sultans, where the new sultan was girded with the Sword of Osman. After the Tour , you will be transferred back to your Hotel at 6pm

Alnur USA  Tours and other suppliers of ground transportation, accommodations, meals or other services shall not be responsible or liable for any damage, death, loss, injury or accident to persons and property in connection with above services resulting directly or indirectly from any occurrence or conditions beyond their control, included but no limited to defects and breakdown or substitution of equipment, strikes, theft, acts of government or other authorities, war, terrorism, riots, fire or as a result of natural disasters.

Alnur USA  and affiliates will not be responsible or liable for any inconvenience and damages due to failure in following instructions, including baggage handling, check in and out at airports, missing any part of the package, missing persons due to their negligence or delay at any time during Hajj tour, or due to improper visas, documents and passports .

The Responsibility of  Alnur USA acts as agents and protector for the passengers’ rights in making arrangements for the land packages, hotels, buses, or any service in connection with the tour and assumes no liability whatsoever for injury, damage, loss, luggage, accidents, delay irregularity which may be occasioned either by reason or defect, though the acts of GOD, dangerous incidents in the air, sea, land, fire, breakdown of machinery or equipment, acts of government or other authorities de jure or de facto, wars, whether declared or not, hostilities, civil disturbances, strikes, riots ,theft, pilferage, epidemics, quarantines, medical or customs regulations, or from any loss or damage resulting from improper passports, visas, or other documents. Alnur USA  will accept no responsibilities for loss or additional expenses due to delay or changes in schedule or other causes. Alnur USA  shall not be liable or responsible for any inconvenience, loss, damage or injury arising in connection with such service. Alnur USA  shall not be responsible for the failure to follow instructions, including but not limited to check-in and delay, loss of luggage or personal belongings (Medicine). It is the responsibility of the airline to determine exactly what procedure will be followed. The policy chosen by that carrier shall be based on their procedure and shall not be the responsibility of Alnur USA and its affiliates. They will also not be responsible for any person (s) missing and part of the Program due to his negligence or delay or absenteeism for any time during the tour and will not be responsible for any additional expenses for the participant to rejoin the tour. Moreover, no charges or upgrades in the Program chosen will be the honored after departure as well as no refund will be given for any services rendered not utilized.

INSURANCE: According to Heaven Tours, Inc.’s  terms & condition, we advise customers to consider Travel Insurance policies for all the trips for an additional fee.

Price Change: Prices are subject to change due to the recent fluctuation in related economies. Without advanced notice.